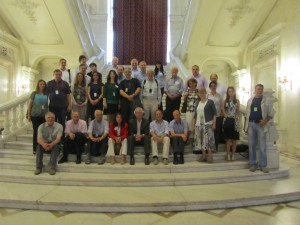 The workshop “Widening participation of CEI Countries in the EU Research Programs” – Training and Research in Physics Workshop – was held in Bucharest, Romania, from 25th to 27th of May 2014. It is the first working meeting, after two preparatory ones held in Venice and Trieste, of at least three workshops in a queue to be held in the frame of the project aiming to promote the integration of the physics community in Central and South-Eastern European countries into the ERA.

The projects was proposed and has been implemented by the Consortium consisting of European Physical Society and its Committee of European Integration (EPS-CEI), International Centre for Theoretical Physics (ICTP) Trieste, UNESCO Venice Office and SEENET-MTP Network. Every member of the Consortium delegated one representaive in its Project Committee (CPC). The main partner and substantial cofunder of the project is Central Europena Initiative – Trieste.

The workshop brought together 31 participants from 17 countries: high level scientists and officials from international organizations or EU institutions from Belgium, France, Italy, Russia, Sweden, Switzerland (CERN), as well as representatives of the scientific communities from 11 CEI/SEE countries: Belorussia, Bulgaria, Croatia, Greece, Macedonia, Moldova, Poland, Romania, Serbia, Turkey and Ukraine. The main goal of the workshop consisted in identifying specific actions and research programs to which joint applications can be prepared.

The meeting included several sessions, as well as a visit to the important EU research infrastructure (ELI-NP), as well as visit to some touristic and cultural landmarks in Bucharest (Parliament Palace and the Old Town).

The main research programmes and actions identified by participants as being of interest were:

To continue the debates initiated during the workshop and to effectively identify calls on these core directions, six Working Groups were established. Their task is to identify one or more relevant calls in EU programs and prepare draft applications to the CPC for further consideration. The next two workshops are preliminary announced as follows:

The Workshop was excellently organized by representatives from Department of Physics, University of Craiova in cooperation with IFIN-HH Magurele, Bucharest. The logistic partner of the Consortium in implementation of the Project is the Physical Society Nis – Serbia.